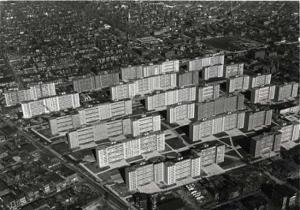 The Pruitt-Igoe Housing Project in St.Louis, demolished in 1972, and a seminal point of the Modernist failure 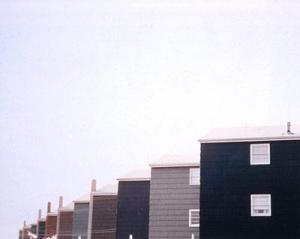 Image of track-housing units, from Dan Graham’s Homes of America, 1965.

“[…] The specific format that art assumes lends it a unique form of power. The point is not to deny this power through postures of political negation or to brush it under the carpet in fear of ‘selling out.’ The point is to use this power.”[1]

Artists have been vital as alternative documenters of history, often distorting the way many histories will be looked back on. I will speak about how artists have used “formats” to assimilate aesthetics that question the commodity objects in capitalist structures. [2] Furthermore, how artworks have become a form of currency through commodity circulations, and how artworks have shifted into the realms of commodity exchange.  I will look at specific pieces of art that have attempted to use the language of mass culture to address issues of commodity fetish and desirability, by mimicking the languages of popular culture.

An early aspect of commodity fetish began with the availability of objects through mass production. This transition was highly visible and recorded after the Haussmann period in Paris. The Modernization of Paris created not a place where “capitalism incidentally happened” but rather a renovated site so as to become “a form of capital itself.”[3] Illusions of social class and the “commercialization of leisure” created working middle-classes that were obsessed with spectacle.[4] Life was now lived out in the streets at bars and cafes, no longer behind closed doors – “living and dying at home was boring and an inconvenience;” everyone’s lives were now visible.[5] This was the rise of new social classes and as Gustave Flaubert suggested “Everything was false […] a false army, false politics, false literature, false credit, and even false courtisanes.”[6]

The continual reorganization and stratification of social-classes can be read as an underlying concern within extraneous forms of representation such as artistic documentation. Artists like Daumier, Manet, Picabia and so forth, used their practice to turn the gaze of critique back upon the subjects of their changing cultures. The subversive formats these artists used to capture the changing identity of popular cultures were the groundwork for generations of artists who followed.

Dan Graham explored identity design in 1966 with his magazine piece Homes For America. Graham’s critique deals with residential assets, and subversively addressed mass production and consumer driven commodification through the ready-made design models of post-war suburban track-housing. Graham’s format uses the same basic critical vehicles as Pop – media images from celebrity and popular culture – by using the language of photo-journalism, while addressing the production phase of the American suburb. Conjoining these modes of signification together, Graham is comparing the “the new suburb to a barrack or prison” by showing a convergence of Fordist production with the mimesis of the individualized family unit.[7] Furthermore, Graham shows statistical male and female preferences of house models and interior colors, and how “a block of eight houses utilizing four models and four colors might have 48×48 or 2,304 possible arrangements.”[8]

Pop -and specifically Warhol- used the industrial technique of over-production, to repeat images and objects until they became mediated and repetitive. The artworks were thus a “production line” that now disallowed the “individual object”.[9] Graham used this format of multiplication (magazine distribution) to comment on the mediated and generic longings of the post-war individual. Graham has picked up on the post-modern sensibility that compatibility, standardized independence, and equality is doomed to fail.  A la Jameson, in the post-modern, the individualist subject is “dead”, and the belief that a “unique personal identity” of the Baudelairean Modern, was a constructed model, and never really existed.[10] Graham was showing that once again, -like the modernization of Paris where whole districts were relocated to create suburbs- America’s obsession with idealistic modern living was doomed to failure, soon creating segregation and ghettos.

Homes For America is exemplary in deconstructing the failures of when the art-object took on a new format with minimalism. This movement was seen to be in reaction to the Dionysian self that was being assumed in abstract expressionism, the attempt at finding the individual and autonomous subject. Minimalism attempted to vacate the personal attributes of the art-object and by creating what Donald Judd called “specific object” that attempted to demand both “autonomy” and “literalism” of the art-object.[11] Judd believed artists like David Smith still assumed too much of an anthropomorphic composition which did not allow the object to possess its own independent space without reference. Though Judd’s gesture is often regarded in this way, minimalism permitted the art-object to begin its change into a polymorphic object allowing autonomy and also personification. This redefinition proposed by Judd of our relation to the art object was meet with criticism, particular by the art historian and critic Michael Fried in his infamous essay “Art And Objecthood” written in 1967 issue of October.

Fried speaks of the “theatrical” demands of minimalist objects, and that “Art degenerates as it approaches the condition of theatre.” It is from this perceived theatricality that Fried is suggests that the object becomes metaphorical as it becomes Art.[12] Judd’s objects demand a specific environment where in which the viewer’s ambulation of the object “cause[s] modulations in significance,” and when the viewer allows this format to ‘perform’ in domains outside of it’s original atmosphere, like domestic environments, the art-object becomes a form of currency through commodity circulations.[13] The minimalist object is eventually absorbed into design, and thus, identical readymade track-housing is able to become the alluring commodity of the new-social classes. As observed by Hal Foster:

“[t]he minimalist suppression of anthropomorphic images and gestures is more than a reaction against the abstract-expressionists model of art; it is a ‘death of the author’ (as Roland Barthes would call it in 1968) that is at the same time a birth of the viewer: ‘The object is but one of the newer aesthetic […] One is more aware than before that he himself is establishing relationships as he apprehends the object from the various positions and under varying conditions of light and spatial context.’”[14]

If this model could be seen as the birth of the viewer, it could be taken as a point when the design of objects began to change due to popular culture seeing objects in a new vernacular. Presentational strategies of the ready-made, and Minimalism’s rejection of low culture could attribute to contemporary fashions of serial production and consumption. It is through this unresolved synthesis that we observe a logic in which the format of Pop combined with Minimalism contributed to new strategies of commodity design. Thus expanding beyond sphere of art and eventually leading to standardizing of home living, which were models doomed to failure. Artists like Picabia and Graham addressed these issues in their time, and opened new avenues for artist like the Jack Goldstein, The Bernadette Corporation, and the New Aesthetic to develop formats in their environments to address the hardships and obscurities of their generations, and the future generations to come.

[2] I have borrowed the term “formats” and from David Joselit’s essay After Art. Formats are “dynamic mechanisms for aggregating content,” A format is not a medium as it does not have a “material substrate,” as mediums lead to objects, but a format is a way to link “nodal connections” and patterns. (Joselit 55)